Angela Yates, aged 44 from Swadlincote, is a passionate driver who is independently mobile again thanks to the guidance of the Driving Mobility assessment centre in Derby. 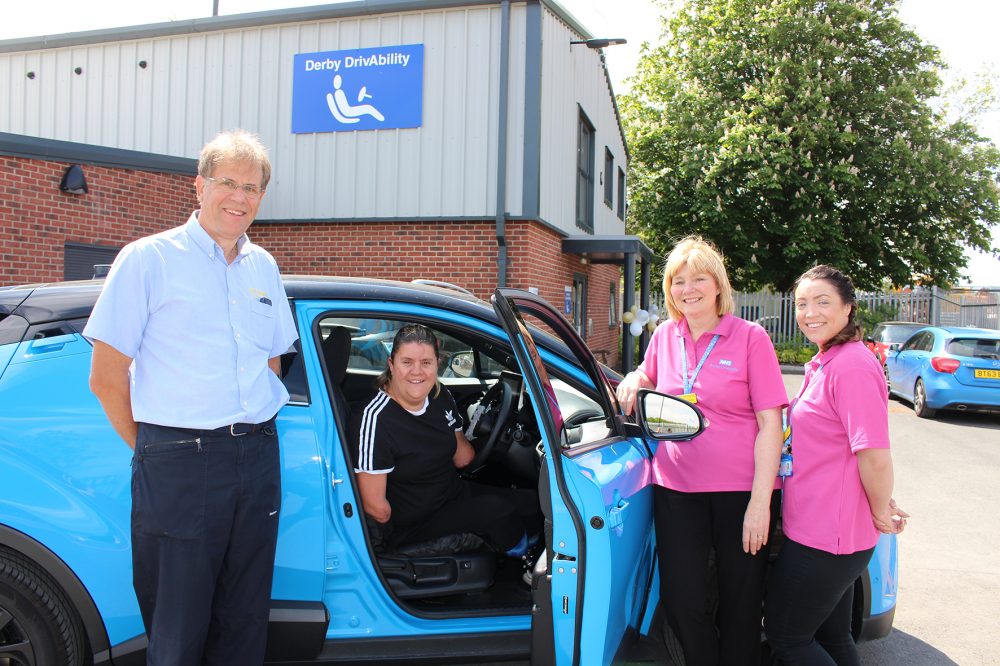 Accredited by the national charity Driving Mobility, Derby DrivAbility is located in a modern custom-built centre and operates within the University Hospitals of Derby and Burton NHS Foundation Trust. Its Occupational Therapists (OTs), Approved Driving Instructors (ADIs) ably supported by the Administration staff, offer professional driving assessments to people who need to gain, or retain, the ability to drive following a diagnosis involving impairment or disability.

Service users seeking qualified advice on assisted motoring either self-refer or are signposted from the DVLA, Motability and healthcare professionals such as GPs. As part of the Driving Mobility network, Derby DrivAbility is supported by the Department for Transport and delivers a vital service to maximise safety on the road. Angela has been supported through this process following quadruple amputations due to the effects of sepsis in 2014. She is now fully independent in a Motability leased Toyota C-HR which was modified by Derby’s Des Gosling Mobility Limited.

Angela was referred to Derby DrivAbility 12 months ago by Nottingham University Hospital. She completed a thorough assessment process at the centre with the skilled NHS Assessment Team who reviewed Angela’s driving and cognitive abilities. Professional recommendations were compiled which gave Angela all the specification she needed to obtain the right adapted vehicle. She applied for a car through the Motability scheme and Des Gosling were given the responsibility of customising Angela’s choice of vehicle – the latest Toyota C-HR in striking blue.

This mainstream car already had many technological features, such as keyless ignition, that would assist Angela, however the engineers at Des Gosling implemented a variety of additional mechanical and electronic components. The range of adaptations in Angela’s car were:

Angela explains: “I have always loved driving. I owned a FR sportscar before my illness which was fantastic however five years ago I thought I would never drive again. The team at the hospital and Derby DrivAbility have been amazing, their support and knowledge has got me back on the road safely and with confidence. Many of the adaptations by Des Gosling are small but they make a massive difference. I’m lucky that I have good sensations in my arms so using the large touch screen to operate many of the controls is no hassle. I have tried prosthetic arms but I just can’t get on with them. All the clever features that have been added to my car mean I can get in and out on my own and I feel in control when driving. When my car first arrived, I was so excited I drove over 500 miles in the first week!”

Angela adds: “Before I went anywhere on my own I had specialist familiarisation driving lessons so I could get used to the new controls. When you experience a life changing operation, you don’t suddenly forget to drive, you just need to learn to drive differently. I’d driven a standard car for over 13 years however using my new controls wasn’t that difficult. The main issue I had come up against when trying other cars was getting in and out, but not with my Toyota. Derby DrivAbility helped me feel comfortable behind the wheel once more.”

Angela is now enjoying the freedom to drive once more on her own and with friends and family. She regularly visits the gym, shops and park to walk her three Pug dogs.

She recently returned to Derby DrivAbility to thank the team and to support its first open day when a range of adaptations and wheelchair accessible vehicles (WAVs) were displayed. Welcoming Angela back, Jane Hitchin, Occupational Therapist Assessor, said: “We were delighted to see Angela again and to hear about her positive driving outcome. Her eye-catching adapted car is very impressive. She is a fantastic individual who has been a pleasure to support throughout the assessment, prescription and provision process. Both Jenny and I always fully appreciated how important independent driving was to her and we are proud to have assisted in achieving
this goal.”